Teeming with mythology and legends, Bangladesh offers a plethora of exciting locales that tourists can visit to unravel these fascinating tales. Whether you’re a history buff or simply interested in tales from a culture of the past, visiting sites where they occurred was once (and in many cases still is) a popular way to learn about history. Here are three of the best destinations right out of Bangladeshi folktale.

The Mossy Mansion of Krittipasha

Located in Jhenaidaha, this haunted mansion is so notorious that it has even been studied by Oxford historians. Accounts include ghostly activity that ranges from animated bricks and candles all the way to full-on ghostly appearances and even a severed head!

Hidden in the trees and covered in several decades of foliage, the mansion includes a secret basement where it is said that the bodies of the Raj family’s enemies were buried. Just a short walk away is the legendary Siddheshwari Temple, where it is claimed human sacrifices were made.

The Temple in the Forest of Wonders

Historically, Raja Pratapaditya built a fort on this spot to ward off Portuguese pirates, but in the 1600s, a Kali temple was built. Now, the temple remains a pilgrimage site, but travellers must be warned that tigers, “mama”, often use the spot as a shelter. 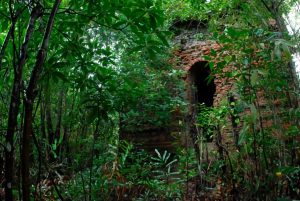 The Sundarbans, the Forest of Wonders, is the largest mangrove forest in the world and is home to one of the densest populations of Bengal tigers. Here, you should watch out for red gamcha, clothes tied around a tree where there has been a recent tiger attack.

The Terracotta Plaques of the Mysterious Math

One of the most curious relics of Bangladeshi history is the mysterious Dhopadi Math at Baro bazaar. Here, you can find gorgeous terracotta plaques where only 13 still survive, showing scenes from the epic poem, Ramayana, including Sita and her exile.

Suspected to have been built between 1206 and 1418, the Math (pronounced Moth) stands precarious and untouched.

To book your flight to Bangladesh, visit FlytoBD today.