The country has climbed 48 notches up and ranked 26th globally, according to the index released on Wednesday.

The index assesses 121 countries and regions based on infection management, vaccine rollouts, and social mobility posting a score between 0 and 90 at the end of each month.

Bangladesh scored 60, which was the highest among six South Asian countries assessed in the recovery index. 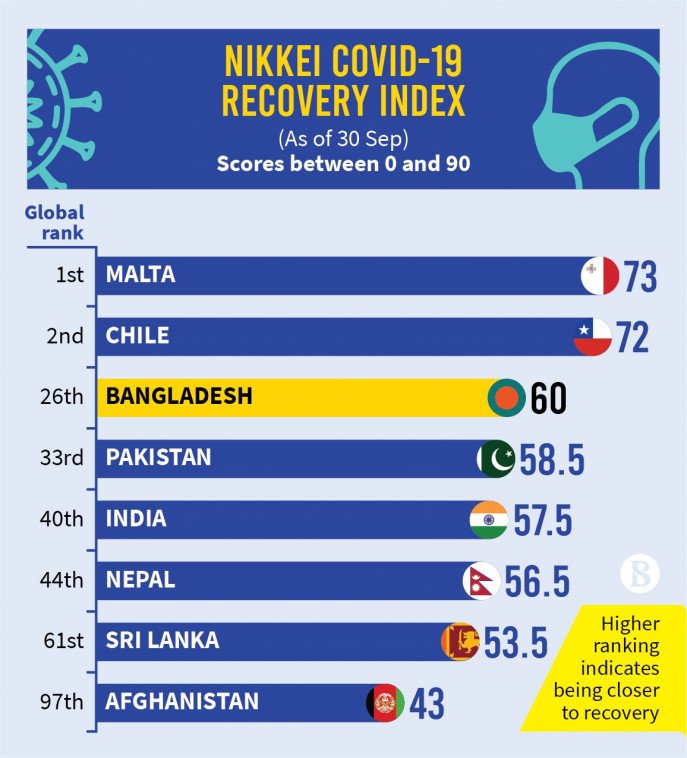 Pakistan took the second spot in the region with a score of 58.5 and ranked 33rd globally, while South Asia’s largest economy, India, stood at the third position in the region and ranked 40th globally, followed by Nepal (ranked 44th) and Sri Lanka (61st).

Bangladesh was in the 74th position in the previous edition of the recovery index.

“The higher the ranking, the closer a place is to recovery – with low infections, higher inoculation rates and less-strict social distancing measures,” according to Nikkei’s report.

Professor Nazrul Islam, a noted virologist and a member of the National Technical Advisory Committee on Covid-19 said, “I think Covid-19 infections will not rise until mid-March next year but it may go up afterwards.”

“If we want to keep infections in check, we must ensure mass vaccination for a wide range of people. After that, even if the infection rate rises, the death rate will not,” he added.

With the highest score of 73, Malta topped the index, followed by Chile, Bahrain, UAE and Saudi Arabia.

China was in the top spot since the index was first published in July but the country slipped to ninth in the latest September index.

Meanwhile, the Philippines ranked last with a score of just 30.5, followed by Laos, Gabon, Vietnam and Barbados.

This index came after Bloomberg’s Covid Resilience Ranking report on September 29, where Bangladesh also advanced five rungs to rank 39th among the world’s largest 53 countries, indicating the country’s resilience to the deadly virus has strengthened.