Most people don’t consider Bangladesh when deciding where to go on their Asian holiday, which is a shame as the country has some spectacular sites. If you’re someone who likes to visit the more unique sites, then this guide is for you. We’ve compiled a list of the top unique sites to visit in Bangladesh.

Not somewhere you’d normally go to when on holiday, but Chittagong ship-breaking yards are definitely worth a visit. Construction of one of these immense vessels is fascinating, but seeing one being torn apart and laid to rest is even more so. The coastline of Chittagong is dotted with over 20 ship-breaking yards and is an industrial wasteland of staggering proportion. Fauzdarhat is a ship-breaking yard northwest of Chittagong and is the final resting place of about one-fifth of the world’s ships, so it’s best to visit this one if you’re unsure about which one to see.

When it was still habitable, Panam Nagar was a prosperous community that dealt with textiles. A flourishing trading hub during the 19th century, it was ravaged by a fire. Unfortunately, Panam Nagar has been left derelict for decades and the locals have named it ‘City of the Dead’. Only 52 of the original buildings are left standing and it’s clear that they were built for wealthy owners, due to the architecture and their endurance despite years of neglect. 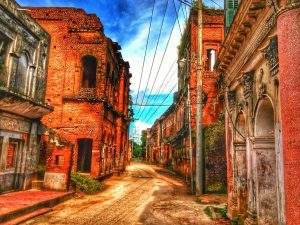 Cox’s Bazar Beach is an incredible 75-miles long and different parts of the beach are named after flora that is found nearby. The further south you go, the bluer the water gets and the less crowded it becomes, which is perfect if you’re not one for large groups of people. Something to keep in mind is that even though the locals are friendly, it is a conservative Muslim country and that you should dress modestly, even when swimming. 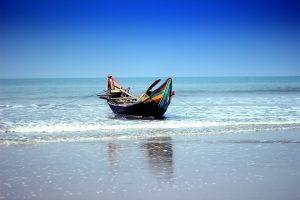 For a cheap flight ticket to Bangladesh among many other offers, visit Fly to BD today.